How do I register?

If you have any questions or difficulties, please contact our Registrar at ebllregistrar@yahoo.com

Who is eligible to play in East Braintree Little League? 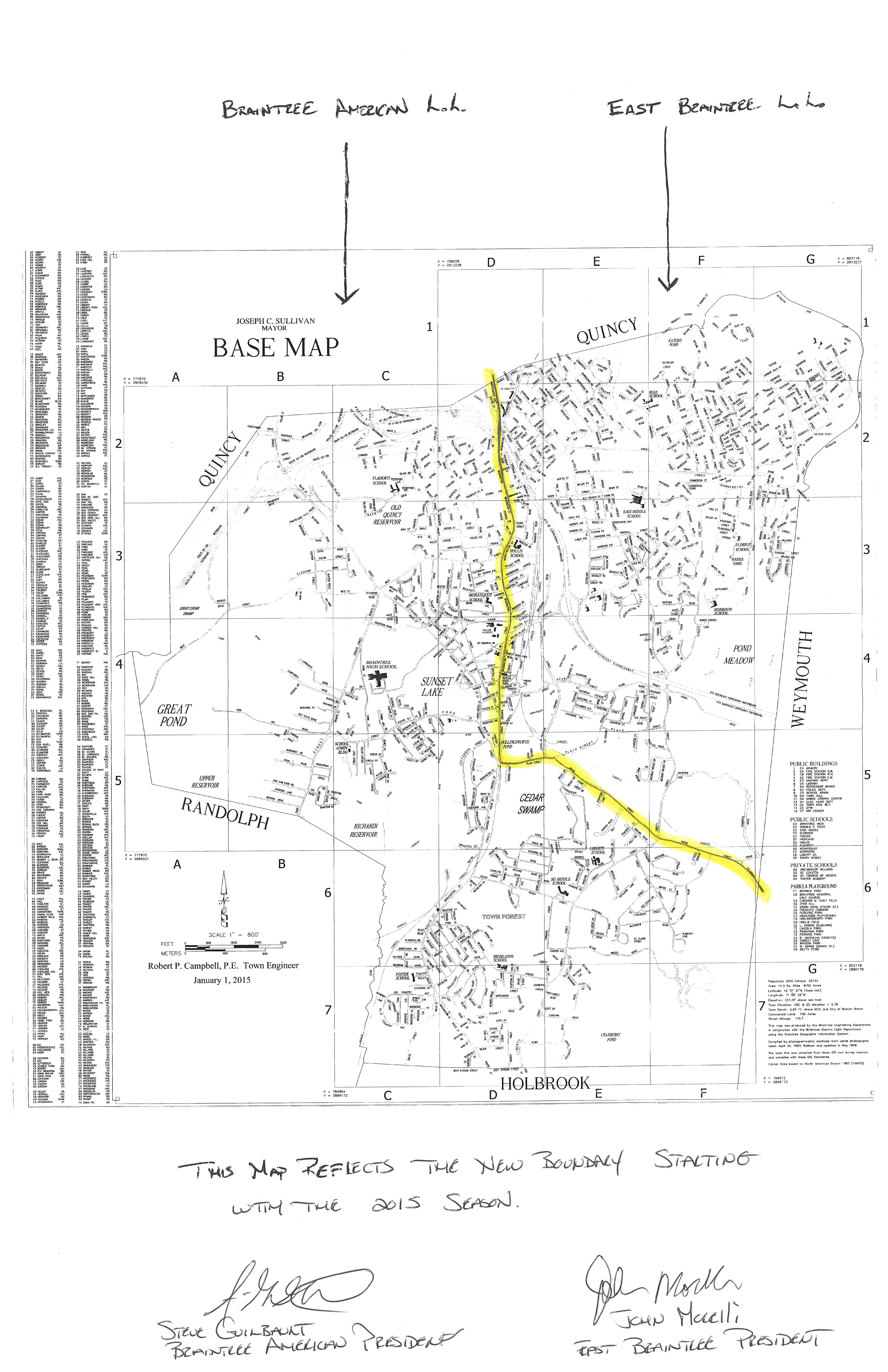 All boys and girls that live OR go to a school in the East Braintree boundary are eligible to play in our league.

The boundary line extends down Washington Street, Hancock Street, Plain Street and Grove Street, dividing the town from Quincy to Weymouth.   Any player living on the East Braintree side of this boundary line is eligible to play in EBLL.

Additionally, East Middle School, Hollis Elementary School, Ross and Morrison Schools are all in the EBLL boundary and any students attending these schools can also play for us regardless of where they live.

See the attached map or reach out to us with any questions.

If you have any questions regarding which league to register for, see the attached map please contact us at eastbraintreelittleleagueinfo@gmail.com.

When does the season start and end?

The season begins the 3rd week of April and ends mid June. Older players may practice earlier in April.

How are teams formed?

T-ball and Instructional: We try to group tball players age 4-6 by school or neighborhood for the most part. Instructional division is age 7. With that said, it is not guaranteed that your player will be with only children from that school. Most teams are a mixture of different schools.

AA and AA: Teams are formed by age group (AA 8/9 and AAA 10/11/12). During preseason, coaches meet and an organized draft is conducted.

Majors: Majors tryouts are held in September for the following spring. All 12 year olds that tryout for Majors are automatically placed on a team. 10 and 11 year olds are evaluated and then drafted to a Majors or AAA team. Notification of Majors teams takes place by the end of February.

All players should be notified of their team assignments by early April. It is important that you register early, as we can not guarantee a spot on a team once the registration has closed (March 1st)

What is the time commitment for each level of play?

Tball has two combined practice / games per week. One is held on a weeknight (TBD) at 5:45pm and the other is on Saturday (time TBD).

Instructional is similar to Tball with the schedule with a possible extra practice as the coach feels necessary.

AA and AAA play one game per weeknight and one on Saturday. Practice is additional per coaches schedule.

Majors teams play one to two weeknight games and one game on Saturdays. Practice is additional per coaches schedule.

Can I request a specific coach?

What rules does EBLL use?

Modifications to those rules may be made by the League. Please see EBLL website for supplements at each division. All coaches are up to date on the current rules.

In case of heavy rain or unplayable fields, EBLL may cancel or postpone games. We will notify players via SportsEngine and will also post on our rainout line as well as FACEBOOK. Please LIKE our FACEBOOK page for up to the minute info. PLEASE do not assume that the game is cancelled due to rain.

How long is a game?

Games are restricted to 2 hours. A new inning cannot start after 1hr 45min.

What does my child need for equipment?

EBLL provides game jerseys and hats for every player. Baseball pants are optional at the lower level. Gray baseball pants are the suggested color for AA, AAA, and Majors players. Cleats are recommended but not required. (No metal cleats). All players need an appropriate sized glove for your right-handed or left-handed player. Team helmets are provided for the team. Many families purchase a helmet for their own player to be used only by that player. EBLL provides bats for the team. Again, many players have their own for practice as well as games. ALL BATS must be certified by USA bats and have the USA Bat logo to be used in our League. Please see USA Bat rule on this site. If you have a question about what size bat your player needs, please do not hesitate to ask your coach or email us.

How can I volunteer to coach? How are coaches selected?

You can register to volunteer when you register your player. Volunteering for a team can include becoming a coach, assistant coach, manager or team parent for younger teams. Once registration has closed, we determine how many coaches we need per division based on player numbers. If we need more coaches in a particular division, our coaching coordinator will reach out to the  parents in that age group. If we have more than enough coaches, we will vote as a board to determine the head coaches for each division. ALL coaches and volunteers are background checked (CORI) before the season begins.

What is a background check?

The law of the Commonwealth of Massachusetts mandates a Criminal Offender Record Information (CORI) for all coaches and volunteers, as well as qualified prospective volunteers, prior to their service, who have particular duties relative to children and youth, the elderly and/or disabled.

What if I have a coach or player concern?

Please bring your concern to the head coach or if needed you can contact the Player's Agent at Eastbraintreelittleleagueinfo@gmail.com. All concerns will be dealt with in a timely manner.

What if I can not afford baseball?

There are need based scholarships as well as other arrangements that are available. Please contact us if you are in need and your child wants to play. We can help!